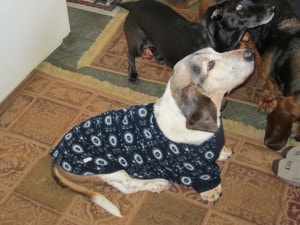 Sam came to BBR in 2012 at the age of 15 when his owner, also elderly and facing a serious surgery, was no longer able to care for him.  He was fostered and then adopted by his foster family who quickly grew to love him.  Here is a picture of Sam wearing his “smoking jacket” to keep him warm when the house was drafty. Sam passed away in June of 2014.  He was probably 16 1/2 yrs old.  Memories of Sam from his adoptive family:

Sammy turned out to be so much more than I expected, and it was hard to lose the stubborn, opinionated, sweet-potato-eating, soft, warm old fart…

We made sure to move his bed into whatever room we were in so he wouldn’t feel left out or lonesome.

I can still feel the weight of his old head resting on my forearms while my fingers rub his jaw joints, which he loved.  I really do hope there’s such a place as the Rainbow Bridge, and I hope he’s young and strong again, and reunited w/the person who loved him for all those years before we knew him.

He’s buried under the big cedars north of the house, as he used to like to wander there back in his more mobile days.