ATB 11/05/2016
16 and 1/2 years young
I adopted Tawny on Oct. 20, 2006.  I met the foster parent halfway on the Wisc./Ill. border.  When I first saw her, I commented how cute she was.  Tawny was more than happy to get in car with me and head to her new home.  I stopped in a Wisc. town to get gas; that’s when she started to whine.  I wasn’t sure what she wanted, but finally figured out she needed to go potty. From then on, that’s how she was called Miss Hoo Hoo.  She whined when she needed something.

She settled in at home right away.  We had another dog; Bonnie, who’s a Brittany.  At first, she barked at her letting her know who was boss.  But Tawny became the one who decided to be boss in our home.  We didn’t have any kids, but all our pets were our kids.

Through the years, she came with my husband Marc and I to Concerts on the Square in Madison.  We took her at least two times with us on Wednesday nights.  Everyone smiled or laughed because she was either cute or low to the ground.  We always had kids who asked during the concerts if they could pet her.  One time, a man yelled out “Flash”! you’re at the concerts.  Flash is a basset hound from the show “Dukes of Hazzard”.

One year, I went on vacation with my mom and sister to South Dakota.  We were gone for about a week. It was in the year of 2012.  When I got home, she was sooo excited to see me.  She kept flipping on her back so I could rub her belly, and then she would get up and whine.  She kept going back and forth on back and then up again. My husband told me at the end of the week she just started to whine and cry because she couldn’t find me.  She does have a hard time if she’s left alone too long.  That was so special to me because she missed and loved me. It was nice to be greeted by the door by your pet.

She always had fun going for walks. Sometimes a 10 minute walk would take maybe about 30 minutes, but Tawny didn’t care.  She made sure she smelled every blade of grass to mark her territory.
​
Tawny will be missed a lot.  She was my first dog that I ever had in my life.  Now I’m 55.  It will be hard to replace such a Sweet Girl like her.  Lorri 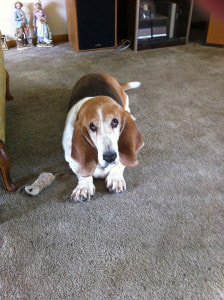 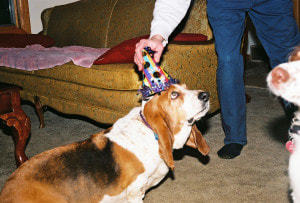 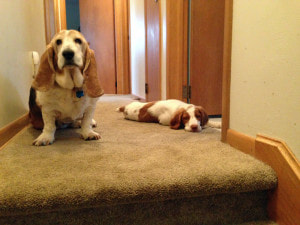